The casting area was one of the 50 foot casting pools.  The advantage of the pools over the carpet area is you get the feel of water loading the rod.  The Sage Z-Axis fly rod line is a fast action rod but flexes more like a medium fast action.  That is it flexes about 1/3 of the way down the blank from the tip

The Z-Axis fly rod line is completely redesigned based on Sage G5 (Generation 5) Aligned Fiber Technology.  The new G5 technology allows graphite to replace fiberglass in the rod blank scrim.  The result is a lighter rod than the XP line and most other fly rods on the market.

For most of my nymph fly fishing, I use a medium action rod.  The first couple of casts, I did not do well.  The casts tended to puddle up without the distance I thought should be happening.  Adjusting my timing and cutting down the power stoke allowed the rod to do the work.  When the rod was working, I could easily roll cast out to 40 feet plus a 6 foot leader.  Several overhand casts reached out to 50 feet which is beyond where my regular casting distance.  (Most fish in Colorado are caught within 12 feet of the angler.  Certainly within 40 feet of the angler.)

After adjusting my power stroke and timing, the Z-Axis delivered a superior line feel on the backcast and the forward cast.  When the line was dragged a bit on the pool water, the rod loaded up and threw a nice tight roll to the casting hoop targets.  Even dropped several into the ring.

A fly fisherman next to me was testing out an XP on sale from a fly shop exhibitor.  I traded him and tried out the XP which felt like a “stick with a tip” and stiff to cast compared to the Z-Axis.  He tried the Z-Axis and liked it so much, he decided to buy one.

In the Sage catalog, the Z-Axis fly rod line is described as “Magic. We think you’ll find it’s the lightest, longest-casting, most accurate fast action fly rod you’ve ever tried. It might not be magic, but it’s pretty darn close.”  Jerry Siem, Sage  Rod Pro and Chief Fly Rod Designer and the design team have done a superior job on the new Sage Z-Axis fly rod line. 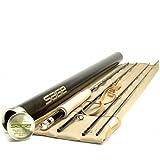